Written by Horace Kephart, this excerpt gave readers ideas for how to cook food while camping. Early hikers likely read this catalog as well. The tips offered resourceful cooking solutions and tasty recipes. 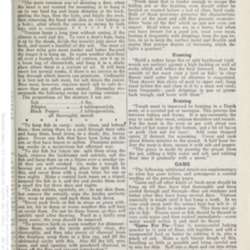 ON the night express from Montreal or rolling up from Rio—out on Ranch 101 or at the Westchester-Biltmore Club—the world-wide trail of the worldly Christmas Gift leads to the door of Abercrombie & Fitch.

Sportsmen and sportswomen cherish thoughts at Christmas which stretch from the flickering flames of the home hearthstone to the creeping shadows of the camp-fire whose 'brands burn dim and red.'

So the traveler's reveries float over the Yule log to the utmost end of the trail—and the Christmas dreams of outdoor boys and girls spread wing in the healthy atmosphere of sport.

Such is the sentiment, the imagination, attaching to these sporting Gifts—thousands upon thousands of them, for indoor use and out—that each gift will add to a whole year's pleasure; one for the desk or den of the city sportsman-business man, another for the pocket or gun-rack of a planter in Ceylon, still another for the son, the wife or the daughter.

The Christmas Feast is spread—and the latch-string is hanging out. Come." 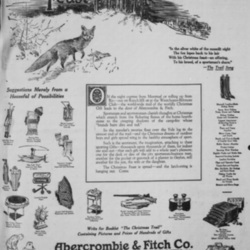 SLIPPING away at Christmas time into the Land We Love, we are given a few days and nights to devote to life's faithful friends. To express that friendship we search for gifts with special meaning—recalling boyhood's valiant partnerships—the esteem that has grown under the genial influence of sport—the rugged regard of one real friend for another.

Sentiment is simple, going direct from one heart to another; and the gift which bears it, costing little or much, must express a sympathetic understanding of the hobbies and tastes of the friend that receives it.

This it is, with the approach of Christmas that makes the Abercrombie & Fitch store The Lone Pine among the nation's shops. It is the sportsman's landmark—the home of the gift of individuality.

Throughout the establishment, with its unlimited selections, each rich in sentiment and merry in intent, there is the genuine thrill of the old-time Holidays, with their jingling sleighbells, their afternoons of sport and evening games around the big log fire. 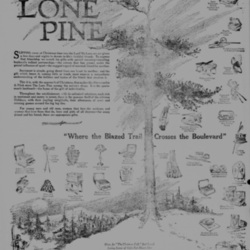 Where the Blazed Trail Crosses the Boulevard

CHRISTMAS, with its childhood memories and beautiful legends, carries us above the roofs of the city and out into the forests.

With every gift which we select we hear the tinkle of the reindeers' bells—that wonderful make-believe which keeps our friendships warm and our own hearts young.

We think of the snow and the ice outdoors and the cozy fire within—of the woods and the woods animals and the hunter dragging in his deer—of the frozen ponds and the village skaters.

Christmas and its Holiday are a season of rosy-cheeked sport, when we gather 'round the hearth in the evening discussing the sporting achievements of the days just passed and our hopes for the months to come.

So the gift with a genuine sporting flavor has a special significance and a special place in the esteem of the one who gets it. The real Christmas tree, to the sportsman, is the lonesome pine on its native hill, sparkling with snow in the moonlight. It stands on the frontier between the nerve-racking realities of his business life and his enjoyment of a glorious vacation.

The Abercrombie & Fitch store stands out today with the same glittering distinctness—a stalwart sentinel on the Frontier of Christmas, with every one of its thousands of gifts, for man or woman, boy or gir, away from the humdrum—a thing that awakens fond memories and pleasant anticipations." 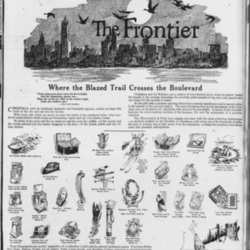 The Punch Bowl Shelter is located in the Jefferson National Forest (VA) between the James and Tye Rivers. It was built by the U.S. Forest Service in the early 1960s and is maintained by the Natural Bridge Appalachian Trail Club. 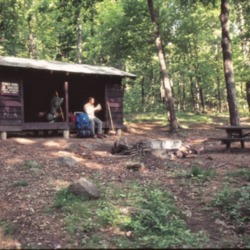 All of the army men who have seen a Theroz Mess Kit in action praise it enthusiastically. They know what it means to a wet and hungry soldier to have warm food and hot fresh coffee instead of cold. Plucky boys out in the trenches and often far away from the camp kitchen laugh and joke about their cold stew—'slum' they call it. But cold strew is no joke.

There is no reason why your boy or any boy that you are interested in should be compelled to eat cold food if you will get a Theroz Mess Kit for him.

The war department does not permit a soldier to carry an ounce of useless baggage, but every military authority who has seen the Theroz Mess Kit demonstrated has endorsed its adoption for all branches of the service. The Government has ordered Theroz Mess Kits as a part of the necessary equipment for Transport lifeboats.

Typically American, it meets a great emergency need. In just seven minutes the triple decker Theroz Mess Kit furnishes piping hot soup, pork and beans and coffee enough for two hungry men. In another minute, the Kit fryer can be put into action by inverting the cover of one of the boilers. Crispy bacon, toasted cheese, or tinned sausage browned to a turn will be ready in a jiffy.

Think for a moment what it means to have a stimulating hot drink in the long trench nights! It saves many a chill and may prevent serious illness. In the morning it means hot water for shaving.

When stiff and worn from exposure, when chilled to the bone from trench mud, when completely done from long hours of fighting, something hot to eat and drink will put new life into the soldier, and with Theroz there is no waiting. At the scratch of a match you will have the full intense heat."

Quotes from military men on the ad:

Lieut. Col. Holcomb, Q.M.C., who made the official tests for the General Staff, U.S. Army, writes: 'It would be invaluable not only to soldiers but to civilians as well. The device should by all means become part of the equipment of every soldier.'

George W. Pratt, Capt. Ord. R.V., writes: 'Has been shown to Col. E.D. Anderson of the General Staff and Ge. Babbitt of Ordnance Dept. Equipment Div., and Maj. Murlin of the Surgeon General's office, all of whom have examined the utensil in actual operation and have commended it.'"

In answer to your letter in reference to the Theroz Mess Kit, I believe that every soldier in the service, whether doing duty in the United States or in the tranches of France, should have one.

I have carefully examined and tested this kit and think it a wonder. I know if I could (would) have had one during my service in the trenches, it would have been a God-send to me. Our soldiers, especially at this time, receive so many useless presents,—things that are of absolutely no use to them,—that I would advise anyone who wishes to send a really useful and helpful article to a soldier, to send one of these kits.

It is very generous of you to send a Theroz Mess Kit to each of the fifty stars in your service flag, and I also appreciate your kindness in offering to send Kits to my friends in the service. I will surely take you up on it.

Please note, there is further text on this advertisement image. The transcription of Empey's letter has "could (would)" as an interpretation of the handwritten strike of "would" and handwritten "could" placed above. 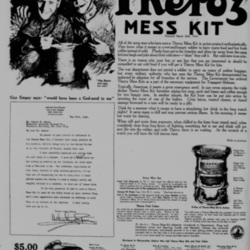 Adds to camping and all outdoor life a comfort and concenience which is otherwise lacking. It enables the campter, automobile tourist, or sportsman to prepare a hot, tasty meal or lunch anywhere and at any time. Has two powerful burners, burns common gasoline. Nothing to screw together or assemble; set up and ready for business in a jiffy. Folds compact in steel case which protects against loss or breakage. Size folded 14 1/2 x 8 x 3 1/2 inches.

Supplied with KAMPOVEN if desired. Does all ordinary baking perfectly. An ideal tent heater.

Ask your sporting goods dealer for the KAMPKOOK. Large Folder in colors sent on request. 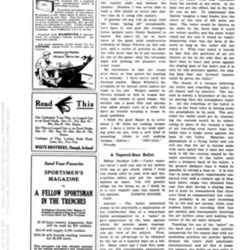 This excerpt shows how Consumers Union Reports reviewed canned soups. It demonstrates how hikers potentially found and selected what to take on their journeys. Cost and weight likely factored into whether a hiker selected these items. For both tomato and chicken soup, Campbell Soup Co. ranked second. 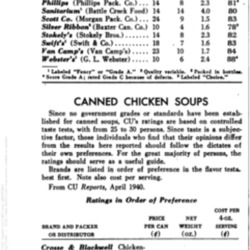 This page from Abercrombie & Fitch's 1916 catalog shows modified foodstuffs that make it easier to carry whether camping or hiking.

This interior cover page represents the first mail-order catalog from Abercrombie & Fitch Company. Depicting two men in a canoe with one paddling while the other aims a gun to presumably shoot some wildlife, this image demonstrates how the company wished to capture outdoorsmen's attention. Furthermore, their main audience was assuredly masculine men, as these individuals fit typical tropes like physically fit and active. The men's activities and the general time period suggests that the man with the paddle is likely a guide. 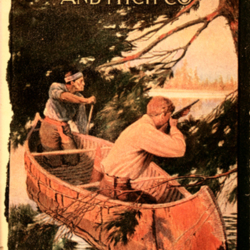 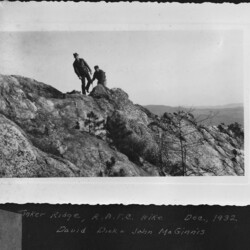 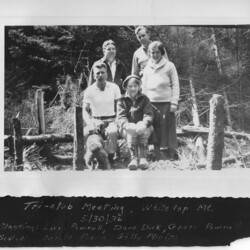