Hikers along the Appalachian Trail today can count on some sort of shelter approximately every 8-10 miles along their route. Construction of this chain of shelters began in the 1930s, but was not completed until after the Second World War. The original route of the Appalachian Trail in Southwestern Virginia included only one such shelter -- the Rocky Knob build by the Civilian Conservation Corps in 1937, pictured here. Except for this shelter, hikers along the original route had to camp either in tents or in the ruins of old barns or farm houses along the way. When Earl Shaffer passed through during his first ever thru hike of the AT in 1948, he wrote:

"I finally stumbled into Rocky Knob by starlight and found the shelter was of stone, open on three sides and with a cold wind howling through. I gathered some snags for fireplace wood and a sackful of leaves to cushion the stone floor. The temperature must have been around freezing." 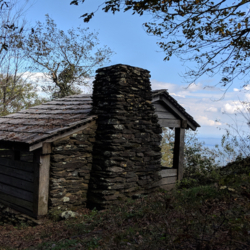 The Tumbling Run Shelter in the Mont Alto (now Michaux) State Forest (PA) was built in 1936, by the Civilian Conservation Corps (CCC). The original structure was torn down and rebuilt in the 1980s by the Potomac Appalachian Trail Club, as a pair of shelters, in keeping with the other shelters in this stretch of the Appalachian Trail. 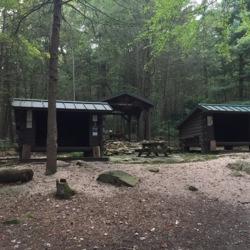 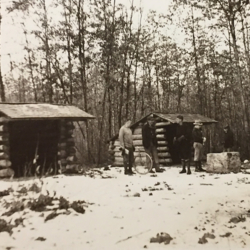 The Ashby Gap Shelter in Northern Virginia was located just west of the village of Paris. Built by the Potomac Appalachian Trail Club in the 1941 on a tract of private land, the shelter was torn down in 1955, when the AT was re-routed away from the site. The 1941 ATC Guide to the Paths of the Blue Ridge offers this description:

Ashby Gap Lean-to is situated in a clearing near the summit of the Blue Ridge on the northwest slope, a little over a mile south of Ashby Gap. It is close to the site of an old cabin. 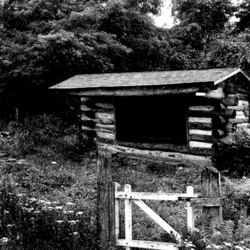 The Crampton Gap Shelter is located near Frederick, Maryland and is one of the original log lean-tos built by the Civilian Conservation Corps in the 1939. It is maintained by the Potomac Appalachian Trail Club. 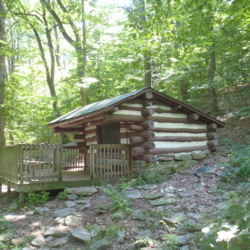 In 1938, the National Park Service published guidelines on the proper types of structures that should be built in the national parks. This booklet, authored by the architect Albert Good, was used by leaders of the Civilian Conservation Corps as guidance for the trail shelters they built along the Appalachian Trail during the 1930s. The description of the lean-to design reads, in part:

In New York State the Adirondack shelter is a tradition, a survival of the primitive shelter of the earliest woodsmen and hunters of this region. The end and rear walls are tightly built of logs, the front is open to the friendly warmth and light of the campfire. The roof slopes gently to the rear and sharply to the front to give a protective overhang.

The Adirondack shelter design was also used by the Appalachian Trail Conference in its guidance to member clubs in 1939 about the shelters they were building in the stretches of of the Trail they were responsible for. 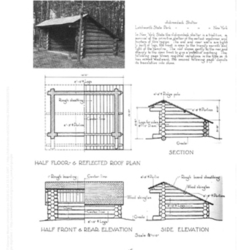 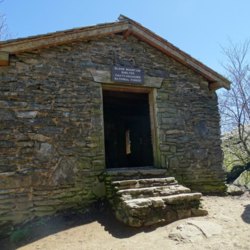 The Blood Mountain Shelter was built in 1937 by the Civilian Conservation Corps for the Georgia State Parks system. In 1956, the shelter was transferred to the U.S. Forest Service, and is maintained by the Georgia Appalachian Trail Club, whose members carried out a major renovation of the structure in 2010 [current image] 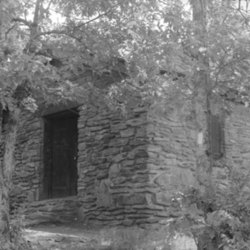 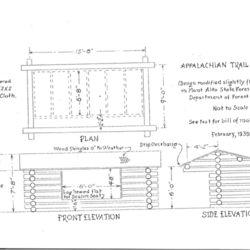