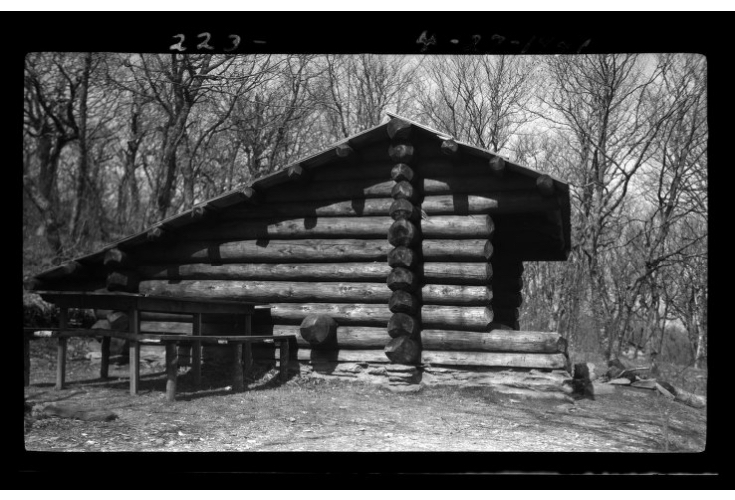 At the June 1937 annual meeting of the Appalachian Trail Conference, representatives of the various trail clubs knew that the Trail was almost completed. With that result in sight (the final section was completed two months later), the next big project facing the member clubs was the construction of a string of shelters along the Trail at convenient intervals. Already in 1937, a number of such shelters existed, but not nearly the 200 plus that would be required if the goal was a shelter approximately every 10 miles. 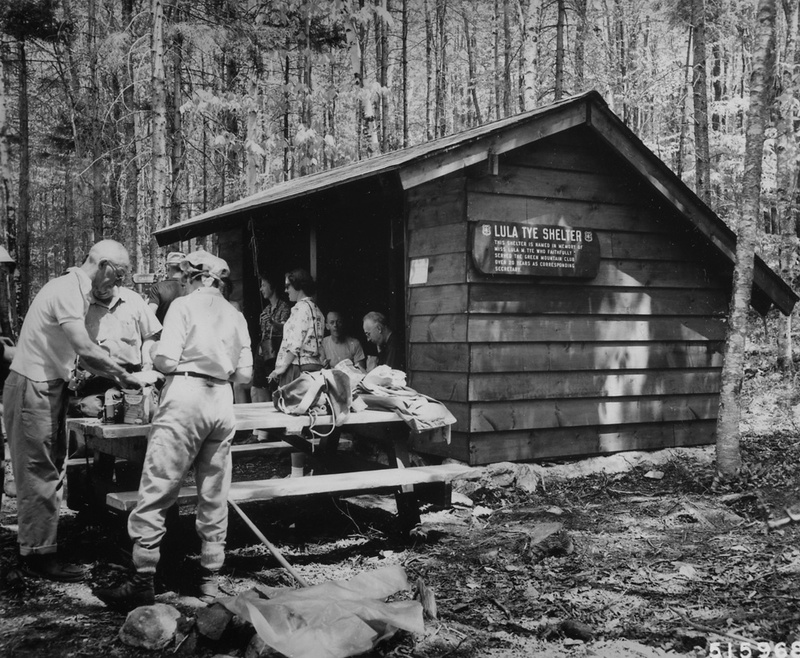 Working with state and federal park and forest services, along with the Civilian Conservation Corps, ATC member organizations began the task of building out the network of shelters along the trail. The first step was surveying desirable locations--on or near the Trail, close to a consistent water source, and if possible at a scenic location. In that national and state parks and forests, a well-established process existed for obtaining permission to build a trailside shelter in a given location. But because so much of the Trail passed through private property, it would then be necessary to obtain permission from landowners to build structures on their land. The ATC relied heavily on local trail club members to negotiate these leases and easements. 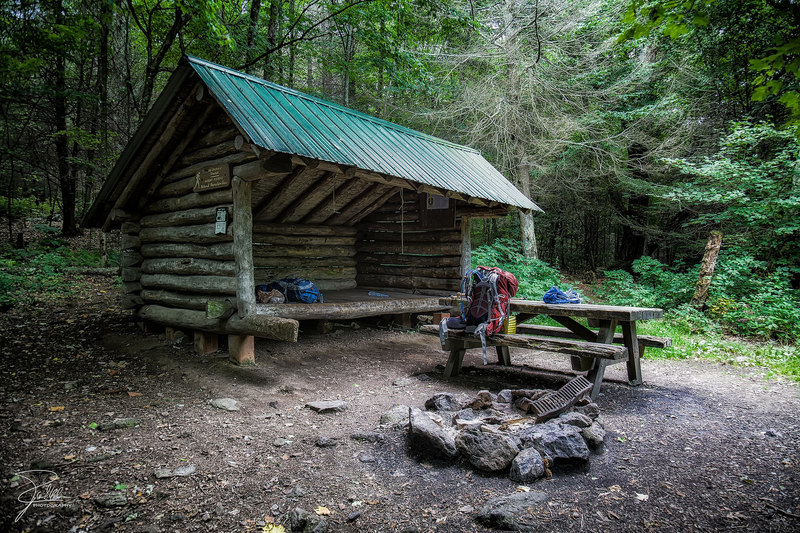 Arranging for the CCC to build shelters on private lands was especially attractive to the local clubs, because it meant that the work would be done both at a high standard and by others. However, CCC regulations required that the work would have to take place within a 30 minute drive of existing CCC camps, a requirement that limited the possible locations for CCC work. In all, 36 sites were found that met the necessary criteria and local clubs set about procuring materials for the CCC crews to use in building these shelters--often the trunks of American Chestnut trees that had perished in the blight of the 1920s.

By 1939, there were 129 shelters of various shapes and sizes spread out along the Trail's route, with the most complete coverage being in New Hampshire and Vermont, where the Appalachian Mountain Club and the Green Mountain Club had already built these structures before the inception of the Appalachian Trail, or in Maine, where the CCC had built shelters for the ATC. South of the Pennsylvania line (almost one-half of the Trail), there were only 25 shelters. 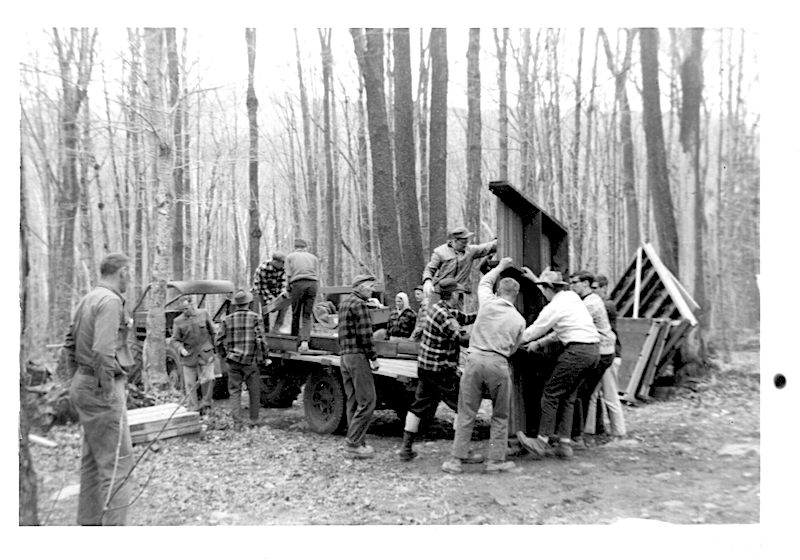 Despite the difficulties imposed by the Second World War--lack of available manpower and building materials--ATC affiliated clubs continued their shelter building efforts almost unabated. By January 1943, the Conference reported that there were now 169 shelters, 56 of which were in the southern half of the Trail.

Building the shelters was rarely a simple task. Many, like the Chairback Gap Shelter (pictured below), were in very remote locations, requiring trail crews to hike miles with their tools and materials. Often, logs were cut, peeled, and shaped on site. Sometimes heavier items like roofing material could be brought in by vehicle, sometimes they were hauled in by mules, but sometimes they had to be carried in on foot by volunteers who had to contend with everything from wild animals to wild weather. 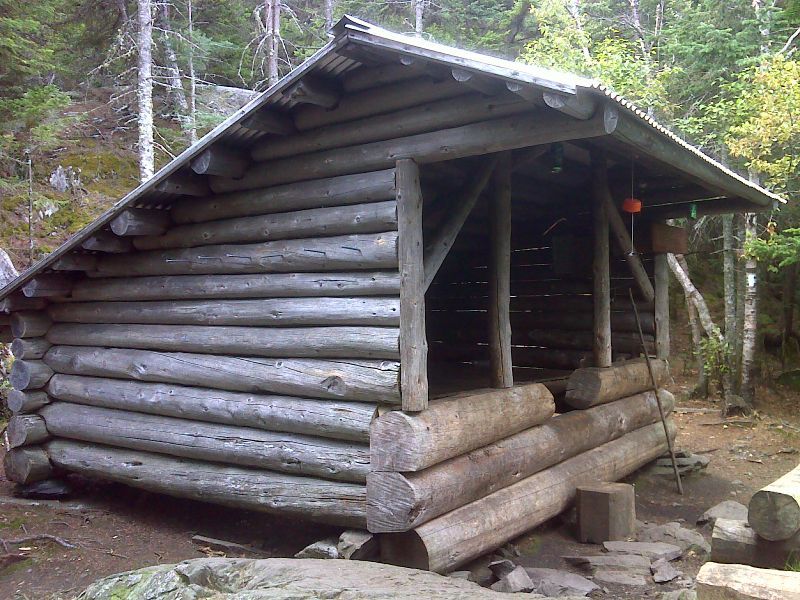 For example, in the January 1955 edition of Appalachian Trailway News, the builder of the Chairback Gap shelter wrote:

After crossing Pleasant River, beyond the beaver flowage I unexpectedly came across a moose...I continued on my way, keeping an eye out for some good climbing trees...On the return trip on Monday...it was clear that [due to heavy rains] fording the Pleasant River was out of the question. My car was scarcely more than a quarter of a mile away, on the other side of the river, but the nearest route was more than seven miles!