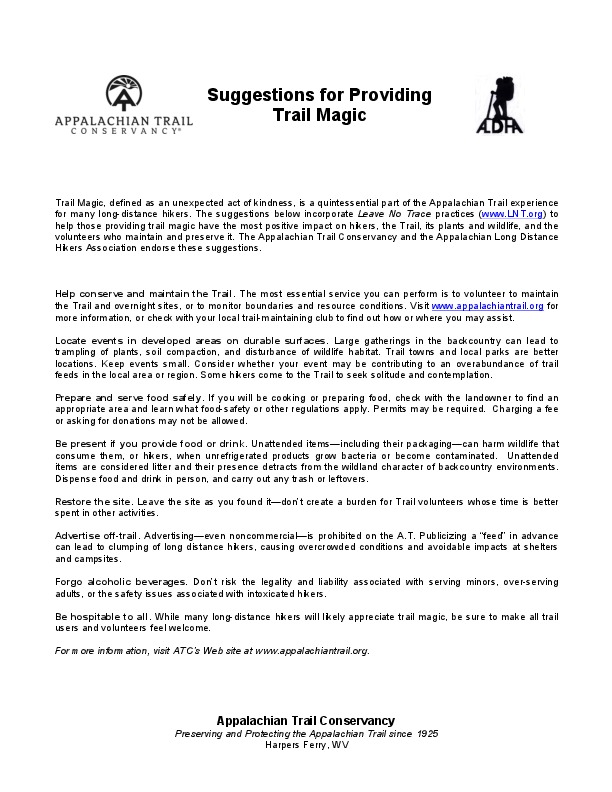 Nearly all hikers, thru or section hikers, would retain some of their fondest memories of hiking the Appalachian Trail through their experience with human kindness, known on the trail as "trail magic". However, despite its meaning to the hikers and trail angels who perpetrate trail magic, the phenomenon has become quite the controversy surrounding the trail, both on the executive board of the Appalachian Trail Conservancy and among environmental enthusiasts.

It has been said the trouble is not just with the food and other amenities given to hikers on the trail, but that the sheer amount of people who gather for a trail magic event such as this are damaging the environment. Blogger and former thru-hiker Mary Beth Skylis said on the blog The Trek that "when specific dates and times are established to encourage feasts at trail heads, thick concentrations of hikers arrive, dismembering the ATC’s efforts to spread out foot traffic and lessen the impacts on the environment, ultimately damaging the environment".

People like Skylis also hold the belief that any material items involved in Trail Magic are hurting the surrounding environment as well, meaning that "Trash and [unattended food] is redistributed into the surrounding areas, intoxicating affected habitats as it acclimates wildlife to human food". However, as being a thru-hiker herself, Skylis also brings to mind the point that not all trail magic is bad, saying that  "the ominous message is not that all trail magic should be eliminated but rather that the effects should be carefully considered before the magic occurs in order to maintain its integrity", meaning that the worrisome problem many hold with the trail magic phenomenon taking hold of the Appalachian Trail is one with the material aspect of it all, e.g. leaving food and trash behind.