An Alternative to Traditional Trail Magic 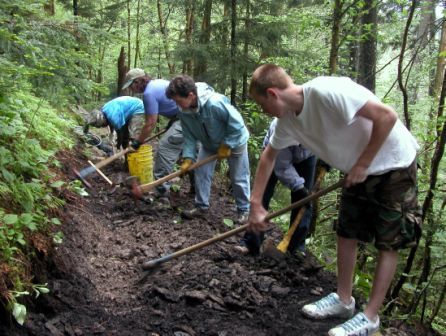 Volunteers clearing the way for the Trail

Most stories a non-hiker will hear about in regards to Trail Angels and Trail Magic involve the acts of kindness being shown through the giving of material items, such as food. However, there are many more routes that can be taken to provide trail magic.

Many ordinary people, and many hikers come into the subject of the Appalachian Trail with the attitude that Trail Magic is when people give you something, such as food, or a ride, and send you on your way. However, that is not always the case. There are people along the Appalachian Trail who are Trail Angels, yet, they don't partake in the giving of material things. They instead " use their own resources to go out on the trail and cut back poison ivy, pull weeds, and clear blown down trees, says John Hedrick, Potomac Appalachian Trail Club supervisor of trails". While some may continue to push the argument that Trail Magic is not necessary, trail magic in this respect is however, because “If [the volunteers] didn’t do it, sections of the trail would be closed down in a year and a half, he says".

Yes, Trail Magic is a wonderful opportunity to become involved in, and a wonderful surprise for any hiker along the Appalachian Trail. However, there is the undeniable fact that "the thing about trail magic is that it’s really easy,” says Potteiger. “Go to the store, buy some food, go to a road crossing. A volunteer effort takes much more effort and planning", arguing that the true purpose of Trail Magic is to give back, without expecting anything in return, and to many, Trail Volunteers are the picture of what Trail Magic was intended to be practiced as.

Furthermore, being a trail volunteer, rather than purely handing out food and other material things along the trail, also serves to quell the fears of many that trail magic is hurting the Appalachian Trail than it is helping it. As a Trail volunteer, one is giving back through making the hike more manageable for their fellow hikers, and that is trail magic in itself.