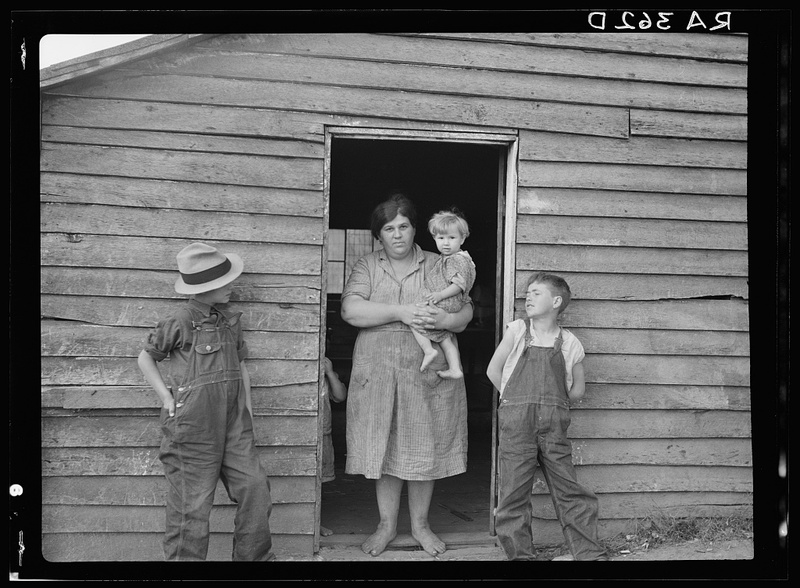 Miriam Sizer was a schoolteacher hired by the state of Virginia and the owner of Skyland Resort, George Pollock- a man who exploited his mountain neighbors and sought to bolster support for the national park.  Her observations of mountain communities assisted resettlement by supporting the claim that mountains were not a healthy, productive place for citizens to reside.  Sizer’s reports regarding her experiences in the late 1920s and early 1930s claimed that the community members she worked with were gamblers and drinkers.  She and the book Hollow Folk both depicted Shenandoah residents as lacking ambition and initiative.  To this, Hollow Folk added that pregnant women in the hollows they studied were of “low vitality” and “puny.”

These observations were coupled with images from the Farm Service Agency’s photographer Arthur Rothstein.  Rothstein was hired to collect photographic evidence of the poverty of the Shenandoah people.  He focused attention on such things as buildings in disrepair, dirty children and shoeless citizens.  In the photos to the left, Rothstein captures a barefoot mother and child.  However, around the same time and in the same town, he photographs two children, and a third in the background, with shoes upon their feet.  It was more common for people, especially children, to go barefoot in warm, rural areas rather than in cold climates or urban settings.  But, this applied to lowland areas as well, not just mountain communities.  As these pictures attest, people did go barefooted in the mountains, though this was not the case with all mountain residents.

Difference in lifestyles existed in the mountains just as it did in other places around America.  There were people in the relocated Shenandoah communities that were college educated, like John Alexander, a lawyer.  Some owned orchards and beautiful, nine-room houses.  There were post offices and stores in some communities.  Yet, there were also some extremely poor, uneducated, underemployed families living in one-room shacks.  This enormous divide was not unique to the mountains.  During the Great Depression, “rock bottom” hit an all-time low.  Just as these differences were seen all over America, so were barefoot and shoed children and adults.

In fact, the parasitic infection known as hookworm affected as much as 40% of the population of the southern states in the early twentieth century.  Hookworks find their way into the human body via a bare foot or other exposed skin landing on soil containing the parasite's eggs, carried by fecal particles.  It can be spread through unwashed fruits and vegetables, poor sanitation and putting fingers into mouths before properly cleansing them.  The parasite feasts upon it’s host and an untreated hookworm infection will usually lead to deficiency in iron and the symptoms of anemia, including extreme lethargy.  One might observe a person with such an infection and assume they lacked ambition and initiative.  A pregnant woman with such a parasite would certainly appear “puny” and of “low vitality.”  It is likely that many of the inhabitants of Shenandoah were battling the malnutrition, weight loss, and fatigue that characterized this infection when they were observed by outsiders to be lacking motivation.

Would the mountain residents be at more risk for such a health risk?  Yes.  But, not because they were in isolated communities cut off from civilization, which was claimed by agents of the resettlement.  The risk of infection increased with the increase of unsanitary conditions.  During the 1920s and 1930s, this occurred in towns all across America- especially the South- on and off of mountains.  With few houses being equipped with an indoor toilet, the occurrence of infection rose.  In fact, the Rockefeller Sanitary Commission recognized the widespread threat of hookworm years before and concentrated educational efforts in Virginia and ten other southern states.