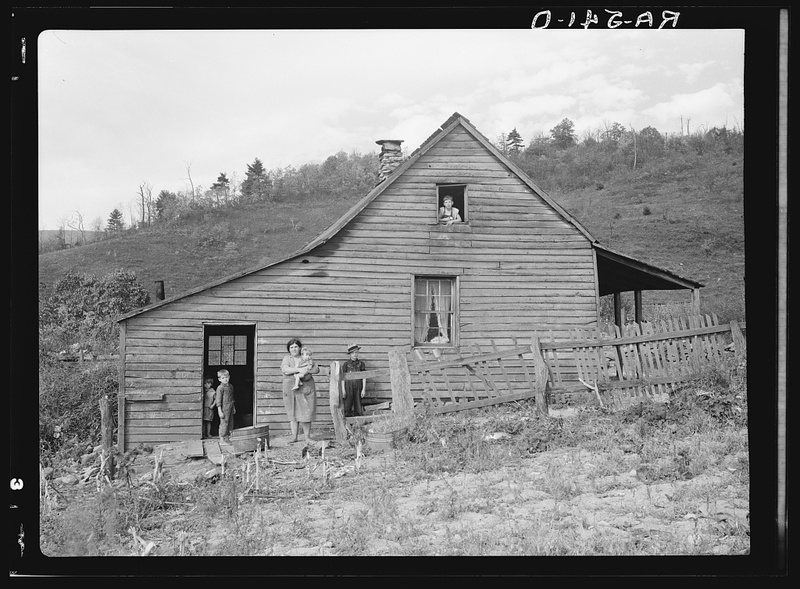 Barefoot family with remnants of cornstalks in their yard on Old Rag Mountain, Shenandoah, Virginia.

Appalachian hardships were not unlike hardships across the rest of America during the Great Depression.  Yet, these hardships were convenient to focus upon for those in support of the creation of Shenandoah National Park.  Seeking public support for the creation of the park started soon after the construction of the Appalachian Trail began in Shenandoah.  From 1928-1935, many supporters of the national park aided misrepresentation of mountain communities.  Federal, local, and private efforts promoted the idea that mountain isolation created physical and mental deficiencies.  Relocation and the Resettlement Agency's new "homesteads" were portrayed as an opportunity for a better life.  By 1931, the year that the Potomac Appalachian Trail Club completed their segment of the trail on private lands, there were still nearly 500 families remaining in the park.  Removal of those families and completion of the park meant many different things.  To some it was the opportunity for business to grow.  For others, it was furthering conservation.  To the PATC it meant that the Appalachian Trail could securely wind through public lands.  But, to residents it meant losing their homes and everything they knew.

With support from individuals and organizations such as the PATC, relocation efforts push forward and utilized stereotypes, omission of facts and hyper-focus on extreme cases.  Yet, the reported developmental issues of Shenandoah mountain-dwellers may have been related to dietary deficiencies and parasites which also existed among lowland communities- especially during the Great Depression. The mountain residents who did not suffer from ailments or intellectual challenges, and those not living in poverty, were not frequently subjects of photographs, reports and studies.  As a result, these communities were perceived overwhelmingly as poverty-stricken, isolated, and backward.  Archaeological discoveries and examination of less publicized accounts of residents prove that Shenandoah Park inhabitants were not cut-off from the outside world, and that their communities included a variety of levels of wealth and education.

Just as in lowland communities, one could find various lifestyles among the mountains.  Some lifestyles were more conducive to malnutrition because of reliance on a corn-based diet.  Other lifestyle choices, such as being barefoot outdoors, allowed opportunities for parasites such as hookworm to invade the body.  Regardless, such health issues were not exclusive to mountain homes.  Mountain hardships were similar to those of many areas of the nation, but finding them among Shenandoah communities was convenient to the task at hand.  Ignoring this universality did not serve the greater good, instead it served the selfish interests of promoters of the park's construction.