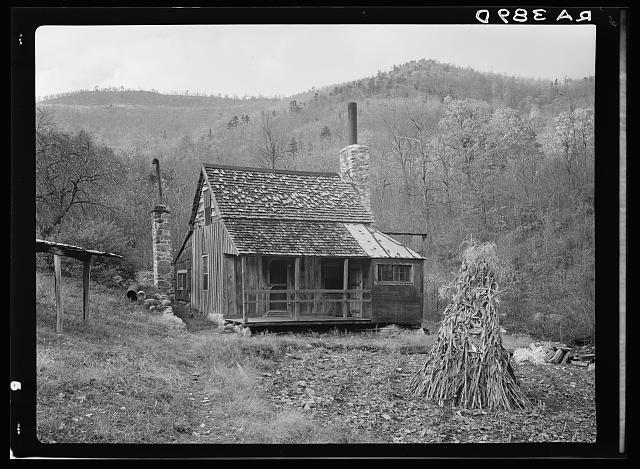 Cornstalks stand in the front yard of this mountain home.  Corn-based diets in the Shenandoah may have led to symptoms of pellagra.

Before the blight destroyed chestnut trees, there were plentiful nuts to eat in Shenandoah.  The trees also provided firewood to support daily living and production of goods.  With the chestnut trees gone, soil eroding, and families to feed, corn became the lifeblood of many communities.  Even in lowland towns, people affected by the Depression had to find cheaper ways to eat.  To the mountain folk, this was complicated by the fact that much of their land was dramatically sloped.  Corn persevered in these conditions and could be found in some form on every mountain family table.

Hollow Folk, written in 1933 by psychologist Mandel Sherman and journalist Thomas R. Henry, studied four communities located in the mountain hollows of Shenandoah.  In Colvin Hollow, they reported finding the lowest levels of social development.  This was also the hollow community with the least varied diet.  The other three were observed to have more farm animals and larger farm plots.  The other three hollows ate things such as navy beans, eggs, tomatoes, and potatoes while Colvin Hollow’s tables lacked that variety and relied heavily on corn pone- at every meal.  However, even in the hollows with more food variety, corn was still king.

Corn was also made into liquor.  The corn whisky was often sold by mountain-dwellers, even to nearby Skyland Resort, further elevating the importance of corn.  George Freeman Pollock, owner of Skyland Resort, described the people who lived in the mountain hollows near his Shenandoah establishment as prone to drinking and causing trouble.  Pollock, hoping that the creation of a national park around his resort would increase business, was one of the many who perpetuated negative stereotypes of “mountaineers.”  He even used the residents of Corbin Hollow as an attraction for his guests, provoking amusement and pity.  But, what does corn have to do with social development or negative stereotypes?  It is all in the milling.

Native Americans soaked corn in an alkaline substance, such as lime juice, before milling.  This made the vitamin B3, also called niacin, available for absorption when consumed.  European settlers in the mountains and lowlands alike did not practice this step when milling.  Not as familiar with corn, they were unaware that they were creating a severe nutritional deficiency with their style of milling.  Thus, diets in the lowland and mountain communities that were primarily corn-based frequently produced symptoms of niacin deficiency- known as pellagra.  These symptoms would persist until the nutritional deficiency was addressed.  Eventually symptoms worsened and pellagra could lead to death.

Symptoms of the disease often included weakness, depression and memory deficits, among other things.  Unfortunately, pellagra was not fully understood until 1937.  This terrible disease could very well have been an underlying cause for some of the observations of physical and mental dysfunction presented in Hollow Folk.  Pellagra may also explain cases of intellectual disabilities described by resort owner George Pollock’s employee Miriam Sizer, who taught in a mountain community for a short while, and the Farm Service Agency’s photographer Arthur Rothstein.