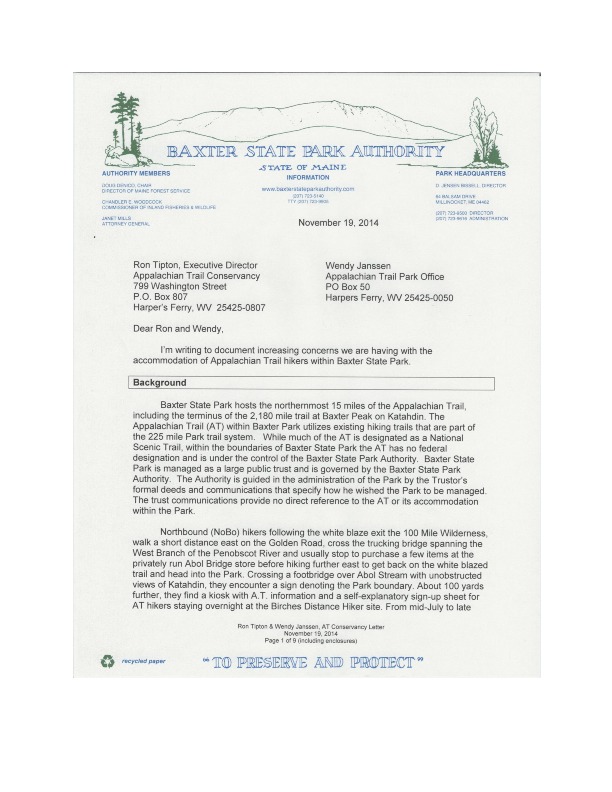 Open letter which lists complaints concerning annually increasing numbers of AT thru-hikers and the accomodations they require, as well as their impact on the park and reluctance to follow park rules.

Bissell's open letter to the Appalachian Trail Conservancy addresses the various issues that Baxter State Park has had over the past few years related to Appalachian Trail hikers.  Bissell stresses the apparent reluctance of hikers coming into the park from the trail to obey park rules and regulations, namely the restrictions on group sizes and consumption of alcohol in the park.  These activities and attitudes towards the park clash sharply with the park's fundamental mission of prioritizing the preservation of the wilderness over human use and enjoyment of the area.  The letter also includes statistics which show the increasing numbers of thru-hikers registering at Baxter State Park each year.  The superintendent also suggests that if a change is not made relatively soon that Baxter State Park may no longer host the trail's northern terminus.

The Appalachian Trail Conservancy seems to have taken these remarks seriously and in June of 2016 opened a new Appalachian Trail Visitor's center in Monson, Maine on the approach to Baxter State Park.  The new visitor's center seeks to educate hikers on the unique expectations of Baxter State Park, including permits for camping, group size restrictions, and other park rules.  This cooperation between the two organizations seeks find the balance between their two missions. For more about the new center: http://appalachiantrail.org/home/community/news/2016/06/20/newly-expanded-appalachian-trail-visitor-center-opens