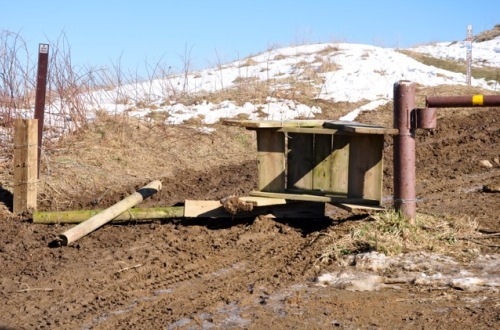 Vandalism occurs in various forms all across the Appalachian Trail. Though most of the vandalism pertains to defacement of nature (graffiti), other incidents affect the trail's maintenance and preservation efforts. In January 2013, a section of the Appalachian Trail near Max Patch mountain in North Carolina was vandalized. A section of fencing protecting nearby lands from vehicle traffic was deliberately destroyed and resulted in multiple vandals driving trucks offroad and into ecologically-conserved forest land. The damage was estimated to be upwards of $5,000 and it took the USFS, ATC, and Carolina Mountain Club over 300 hours to repair the trail and restore the land. The culprit was a man named Tyler Pace, a 24-year-old North Carolinian who was eventually apprehended and sentenced to 90 days in prison. Details of the incident can be found on the Appalachian Trail website. 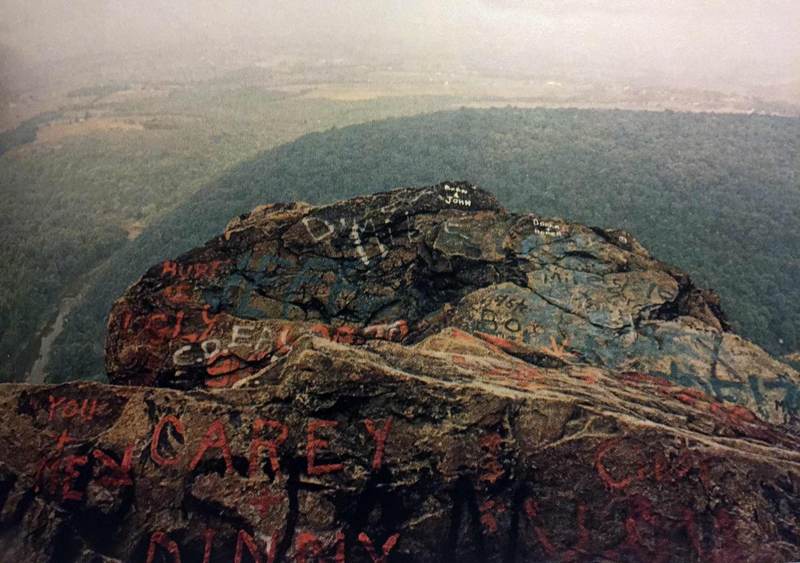 Hawk Rock in 1971. Note the already-prominent display of graffiti. 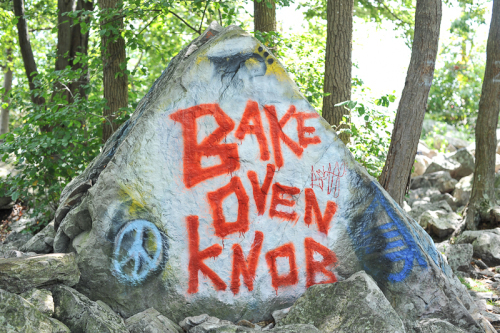 The colorful graffiti on Bake Oven Knob makes it one of the most visible and famous trail landmarks.

Incidents of graffiti have been on the rise in recent years all along the Trail. Although artistic tags and special signatures have traditionally existed at various cabins, shelters, and geographic landmarks, new graffiti is beginning to appear in more secluded parts of the trail which were previously untouched and preserved. Graffiti is considered to be defacement of government property but is difficult to enforce on the trail. Citations rarely occur despite identifying markers such as a person's initials or start-end point. Trail officials believe a snowball effect is occurring where the increasing prevalence of graffiti is seen as an indicator to others that such type of activity is acceptable along the trail. Currently, the 7,000 AT volunteers are the ones responsible for cleaning up graffiti.

The most prominent areas of graffiti are often geological landmarks found near scenic landscapes on the trail. Pictured left, both Bake Oven Knob and Hawk Rock are two such locations where hikers tend to congregate. Unfortunately, these locations have seen an exponential rise in graffiti due to the aforementioned snowball effect, and many hikers and nature enthusiasts have begun to complain about the epidemic. A time-lapse series of photographs published by the Duncannon Trail Community shows the full extent of graffiti saturation over the past forty years, and despite the club's best efforts to remove the spray paint, new hikers and vandals return every hiking season to replace what had been removed.