Wildfires are an occasional threat to any large forest. Though these fires are often created by drought conditions, high winds, and/or severe thunderstorms, there has been a recent rise in wildfires resulting from arson. Beginning in November 2016, the southern section of the Appalachian Mountain range was affected by several large fires which have affected both the Appalachian Trail and nearby communities. In an Associated Press article published by NBC news, northern Georgia resident Carly Gentry explained the effects the fires were having on hikers: "For weeks up here, we've been having smoke, but it is getting more intense for sure... [now] you can hardly see to the next ridge."

Police suspect arson as the cause of both this blaze and several others in the Tennessee-Kentucky area, but so far only one arrest has been made. A 21-year-old man named Johnny Mullins (left) is suspected and charged with 2nd-degree arson involving a wildfire near Letcher County in eastern Kentucky. In a strange case, Mullins appeared to be a self-promoting amateur weatherman who used the fires to promote his Facebook weather broadcasts. In an Associated Press interview, the local police chief believed he purposefully set the blazes "because he enjoyed the attention he got from the Facebook stuff." Arson wildfire suspects are traditionally difficult to apprehend due to the lack of witnesses. 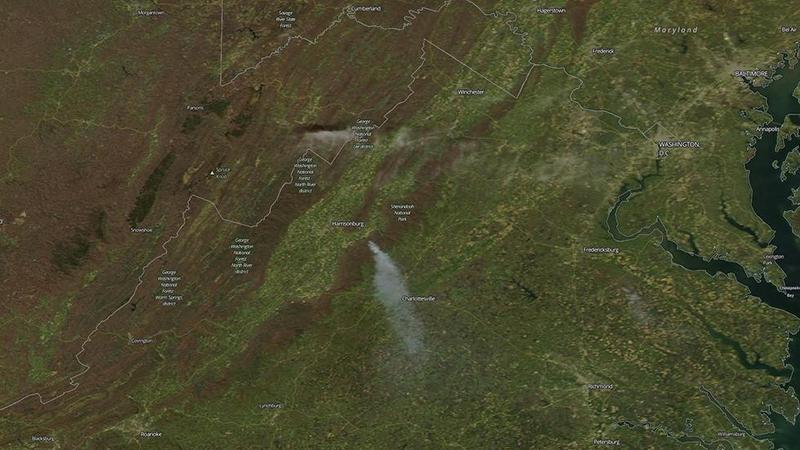 Earlier in 2016, the Shenandoah National Park in western Virginia experienced several wildfires also resulting from arson. Multiple sections of the Appalachian Trail were closed down while local and out-of-state firefighters attempted to control the blaze, and a portion of Skyline Drive was closed to the public. Sean Breslin of The Weather Channel reported on the blaze in which officials claimed over 8,000 acres of the forest had been destroyed by the time the fire was only 40% contained. Local law enforcement officials didn't have leads in this case but approached the public with rewards for information. Nearby residents and hikers were encouraged to keep a close eye on their surroundings and report any suspicious activity or signs of smoke as soon as possible. The blazes in the Shenandoah National Park were so large at one point that they could be seen by orbital satellites (picture left) with huge smoke plumes spanning hundreds of miles.