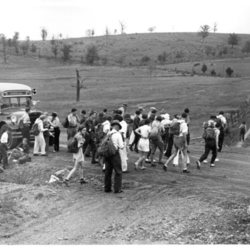 The Dave Lesser Shelter is the last shelter on the Appalachian Trail before northbound hikers reach Harpers Ferry, or the first they encounter south of Harpers Ferry. Maintained by the Potomac Appalachian Trail Club, the shelter is a three-sided structure with a very large front deck. There is also a picnic pavilion with a fire pit and a privy. Half a dozen tent sites are scattered along the slope below the shelter and the freshwater spring is .25 miles down slope. Relatively few thru hikers stop overnight at the Lesser shelter, largely because they are so close to Harpers Ferry, the psychological mid-point of their hike (the real half way point is 80 miles north in Pennsylvania near Pine Grove Furnace). The shelter was built in 1994. 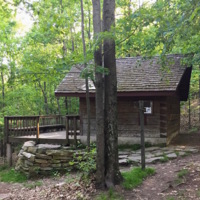 A page from the Dave Lesser Shelter logbook with entries from April 26, 2016, to May 9, 2016. The first three entries are typical of the sort of inspirational writing long distance hikers leave behind--either as messages to friends along the trail, or simply because they want to. The May 9 entry contains artwork of a sort that often ends up in the shelter logs. 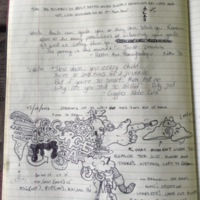