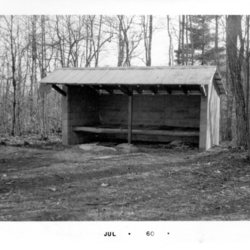 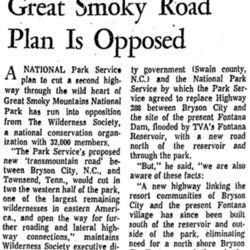 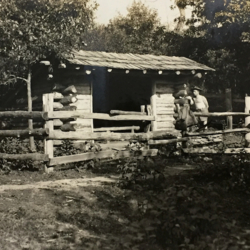 The Spring Mountain Shelter in Tennessee was one of the early Appalachian Trail Shelters in this region and survives in its original form. Built from logs cut and peeled nearby, the Spring Mountain Shelter is a typical example of the Adirondack style lean-to favored by the trail maintaining clubs in the Trail's infancy. In this photo, by Myron Avery, you can see his famous measuring wheel that went with him everywhere he went on the Trail. The shelter is currently maintained by the Carolina Mountain Club. 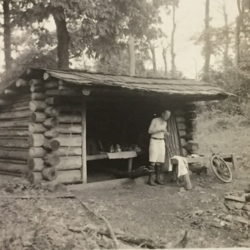 The Moreland Gap Shelter was built in 1960 by the U.S. Forest Service and is located in the Cherokee National Forest. It is maintained by the Tennessee Eastman Hiking and Canoeing Club. Note the large trash pile to the left of the shelter and the vandalism on the shelter walls. Litter and vandalism were increasingly a problem along the AT in the early 1970s and led the Appalachian Trail Conference to consider removing the shelters altogether. 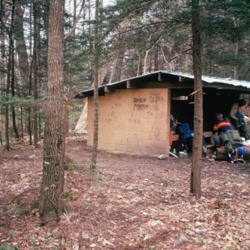 The Cherry Gap Shelter is located in Tennessee along the Tennessee/North Carolina line in the Cherokee National Forest. This shelter was built by the U.S. Forest Service in 1962 and is maintained by the Tennessee Eastman Hiking and Canoeing Club. 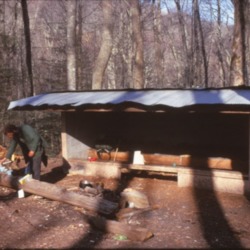 The No Business Knob Shelter is located in the Cherokee National Forest near Erwin, Tennessee. It is a concrete sided lean-to of the type constructed in a number of locations in North Carolina and Tennessee. This shelter is maintained by the Tennessee Eastman Hiking and Climbing Club. 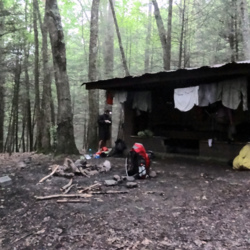 This quaintly named point on the Appalachian Trail -- four miles northeast of Newfound Gap -- is the destination of many hiking trips in the Great Smokies. This jagged point is no more rugged than other near-by peaks along the Sawtooth section of the Great Smokies. Its extreme ruggedness, however, was exposed to view when that spot was swept by fire in 1925. 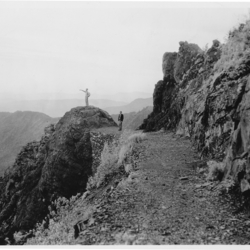 Day Hikers on the Appalachian Trail (1959)

A group of day hikers at an Appalachian Trail shelter in the Great Smoky Mountains National Park (1959). 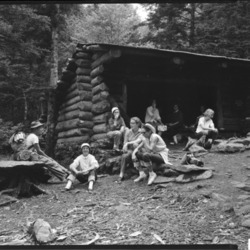 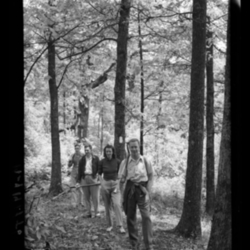 Marking the Appalachian Trail in the Great Smoky Mountains National Park. Albert Roth is adding one of the original AT blaze signs to the trail route just south of Clingman's Dome. 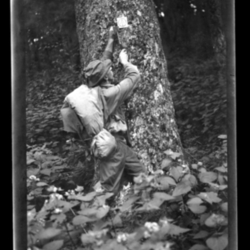 Myron Avery during a survey of the route of the Appalachian Trail in the Great Smoky Mountains National Park. 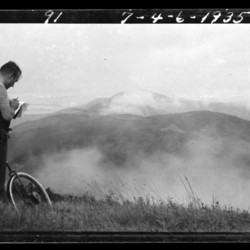