From reverse of photograph: "Replacing the Roof on the East Carry Pond Lean-to (1954)" The East Carry Pond Lean-to is one of the many Ghost Shelters along the Appalachian Trail. In this photograph from 1954, one can see that it was a small log sided lean-to structure with a shingle roof and a dirt floor. It was maintained by the Maine Appalachian Trail Club. 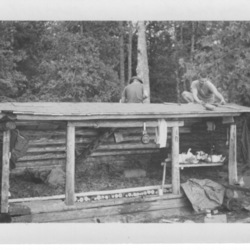 The Bigelow Mountain Shelter, pictured here sometime in the 1950s, was removed from the Appalachian Trail in the 1960s. It is a typical version of the log sided Adirondack style lean-to favored by the early shelter builders. It was located just south of the current Horns Pond Shelter. 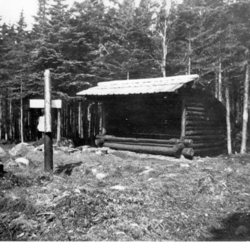 The Poplar Ridge Shelter in Maine is a traditional Adirondack style lean-to, maintained by the Maine Appalachian Trail Club. The description on the reverse of the image reads: "Poplar Ridge Lean-to, an ideal resting place." 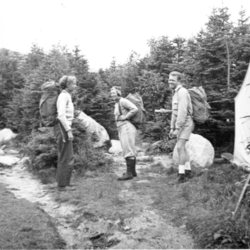 Chairback Gap Shelter (Maine) in the 100 Mile Wilderness. This shelter was originally constructed in 1954 by the Maine Appalachian Trail Club. 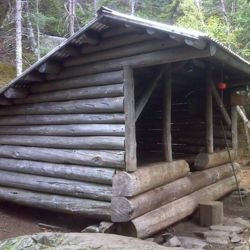 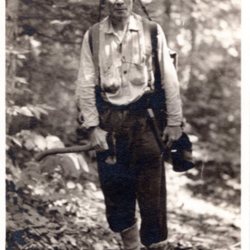 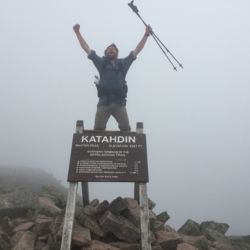 Mount Katahdin as seen from Daisy Pond (now Daicey Pond), photographed by Myron Avery. This image is from the Myron Avery Scrapbook Collection at the Maine State Library. 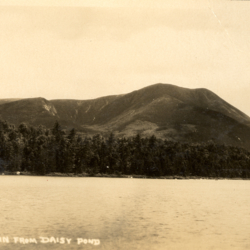 Members of a Potomac Appalachian Trail Club (PATC) day hiking group at the summit of Mount Katahdin in 1939. Of the 37 individuals in the image, 22 signed the photograph on the back. Almost half of the group is female, showing the high degree of participation in these expeditions by female members of the Club. It is also worth noting that the now iconic sign on the Katahdin summit was not there in 1939. 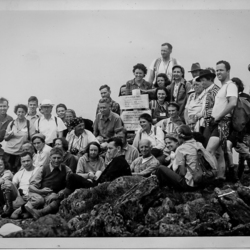 Map of the Appalachian Trail

A map showing the length of the AT, starting from the southern terminus of Springer Mountain, Georgia and ending at Mount Katahdin, Maine. 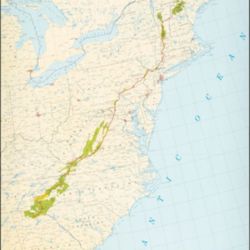 For many north-bound through hikers, Shaw’s Hiker-Friendly Lodging in Monson, ME represents their last bed and hot meal before heading into the "The 100-Mile Wilderness." 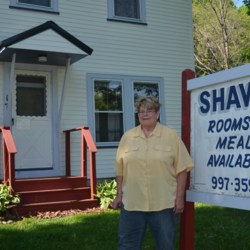