From 1931-1952, the Appalachian Trail passed over Poor Mountain, just south of Glenvar, Virginia. Southbound hikers descending from Catawba Mountain near Mason's Cove crossed the Roanoke River in Glenvar, then hiked up and over Poor Mountain on a very steep road. When they reached the summit of the mountain, they descended into the Bent Mountain community near Bent Mountain Falls. The 1940 edition of the Guide to the Paths of the Blue Ridge says: "Pass through Hemlock Dell (summer colony) at 3 m. Ascend steeply up crest of mountain on dirt road with fine views." That road today is only passable by cars from April - November and is never plowed of snow. 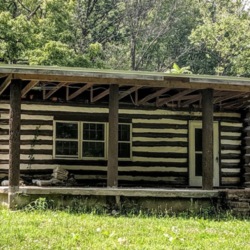