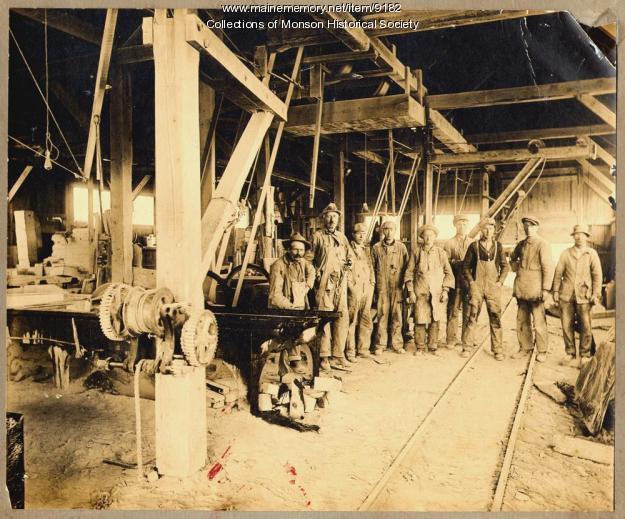 Inside a slate mill. Monson slate is considered to be of fine quality because of its rich black color.

The land that is now Monson, just like the rest of the State of Maine, was originally part of Massachusetts. In 1811, Massachusetts granted two tracts of land, each three miles wide and six miles long, to Hebron Academy and Monson Academy. In 1822, two years after Maine became a state, the two tracts of land were joined and incorporated as the town of Monson.

Slate was discovered in 1870, and, for many years, Monson was a slate-mining town. The Monson Maine Slate Company was the first quarry to open, operating until 1943. The Portland-Monson Slate Company was formed later, and today, under the name Sheldon Slate Company, continues to produce black slate. The grave markers of both John F. Kennedy and Jacqueline Kennedy Onassis in Arlington National Cemetery, Virginia, are made of black slate from Monson.

Residents of Monson also work in wood and textile mills, while a large number run businesses that cater to and support the hundreds of AT hikers who pass through the town each year.