Walter D. Greene (1872-1941) was a Broadway actor and Maine forester who was the person most responsible for the route of the Appalachian Trail in Maine. Benton MacKaye's original plan for the Trail ended at the summit of Mount Washington--the highest peak in the Northeast. But as the Trail project began to develop, enthusiasm began to build for an extension of the Trail to the summit of Mount Katahdin, Maine's highest mountain.

Throughout the late 1920s, the task of pushing the Trail through the dense wilderness of western and central Maine seemed insurmountable. But in the early 1930s, ATC Chairman Myron Avery, who was himself from Maine, decided to push the project all the way to Katahdin, a mountain he had extensive knowledge of. For this task, he reached out to Walter Greene in 1931, and asked him to scout a possible route to Katahdin, a task Greene happily accepted. 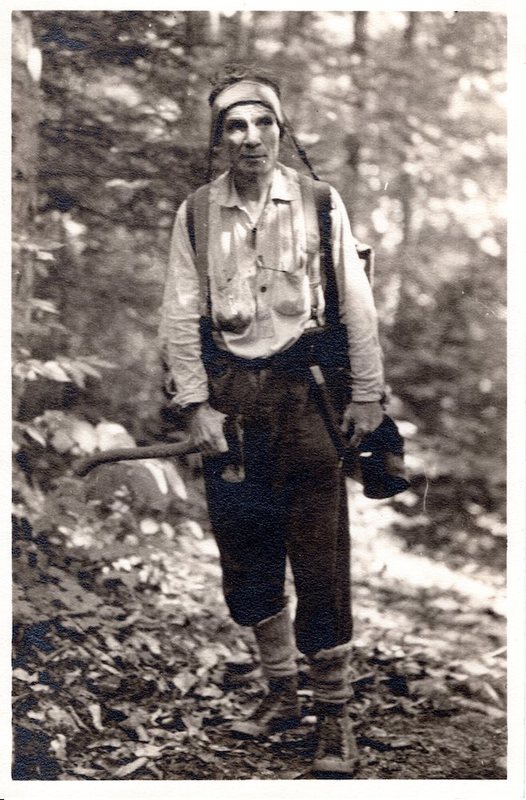 Over the next two years, Greene scouted, then blazed, and eventually helped cut the Trail route from Katahdin to Monson, through what today is known at the 100 Mile Wilderness. His scouting and blazing expeditions were almost always solo affairs. As Appalachian Trailway News editor Jean Stephenson wrote in her obituary for Greene in 1941:

When, by 1933, after two years of exploration, study and construction of connecting links, a through trail in eastern Maine seemed feasible, there appeared athwart the route an insurmountable barrier. This was the fifteen mile, densely wooded trailless Chairback-Barren Range. The problem seemed impossible of solution until Walter Greene attacked it practically single-handed. This struggle here--the burden of carrying enormous loads and the extremely difficult trail construction are almost beyond belief. There are few instances in the annals of trail-building that can rival Greene's accomplishment. This work is all the more remarkable in that his labors commenced in his sixty-first year.

Greene's efforts to knit together a disparate set of smaller trails were ultimately successful. Although it required the intervention of the Civilian Conservation Corps to bring the work to its conclusion, the route Greene chose for Avery became the existing route of the AT in Maine today.