Rahawa Haile Hikes the AT 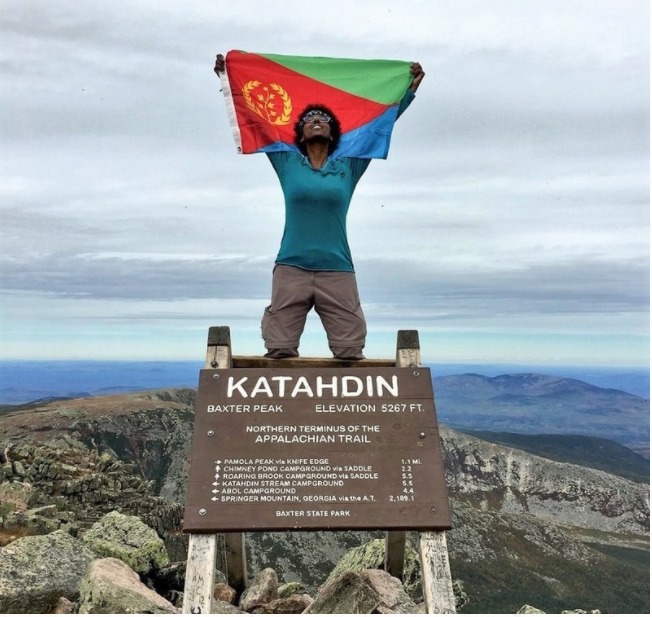 Rahawa Haile at the conclusion of her AT thru hike

Rahawa Haile is now a social media icon after she completed her thru-hike of the Appalachian Trail in 2016. Haile began her trek in March in Georgia and completed it seven months later in October and stood proudly atop Mt. Katahdin.

Throughout her hike, she documented almost every experience via social media platforms such as Twitter, Instagram, and Facebook. Surprisingly enough even in the year of 2016, Haile reports that she only encountered one person of color throughout her entire hike. Haile proceeded to have a brief conversation with the man she had met who happened to be doing a southbound thru hiker and he was interested in why she decided to take on the responsibility of documenting every experience she had on the trail. Haile explained that she felt as thought it was her job to expose the fact that there are not many resources for people of color who hike. In an interview with Atlas Obscura, Haile says: “Another reason I documented this hike is because there are so few resources for black hikers. If you search on Google, the first result for “black hiker” is a pair of Timberland boots.”

In the interview, Haile’s final thoughts stood out to me as I realized the importance of what she was saying as I continued to complete this project. In her final thoughts she notes: “There’s already a debate about who the outdoors are for. There are many Americans, especially white Americans, who don’t understand why that question is being asked at all—who say, all are welcome in the national parks, do what I do, go outdoors. Nothing is stopping you. There’s no sense of history whatsoever. What gets lost in talking about diversity isn’t just a question of how can we can get more people of color outdoors. We have to address how we can get white audiences to acknowledge there are barriers and why that matters. I’ve seen so many people who are like, I don’t understand why we’re talking about race, the outdoors are where we go to get away from it all, why does no one ask why there are no white people in the NBA, etc. There needs to be more work focusing on educating individuals about this country’s history. One of the most the important things I did on the trail was talking to people. Trying to be patient. I shouldn’t have to be a black ambassador, but I also know I got through to a lot of people, and I hope I can get through to more.”

Haile’s experiences, although recent, has been an inspiration to minority hikers across the country. Since completing her thru hike, Haile has continued to be a very involved and contributing member to the hiking community. She has done a number of interviews regarding her experiences and even takes the time to speak at various schools in her local area. Haile loves spending her down time day hiking different trails and continues to document her experiences on her personal Twitter page.