Some say it's one of the most beautiful places on Earth.

The Appalachian Trail is not just a trail, but over two thousand miles of vast wilderness and nature stretching down nearly the entire length of the eastern seaboard. It is home to numerous indigenous species of wildlife and vegetation as well as home to many people who've lived nearby or dedicated their lives to walking, preserving and/or protecting the trail. It is also a century-long storybook that has captured countless historical moments, people and artifacts.

This exhibit is meant weave together the story of the Appalachian Trail through pictures taken by photographers, hikers, historians and other individuals throughout its existence. It will go as far back as the 1920s and 30s and come as far forward as the modern day, and include a special collection regarding those displaced by the federal government's attempts to acquire land for the trail. 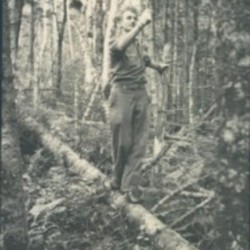