How the AT Saved Monson, Maine (Student Exhibit)

The town of Monson, Maine, is the last town that northbound Appalachian Trail hikers enter before heading into the One-Hundred Mile Wilderness – or the first town that southbound hikers encounter after completing that remote stretch between the town and Mount Katahdin, the northeast terminus of the famed trail.

Monson’s 686 residents, as of the 2010 Census, enjoy a harmonious and interdependent relationship with the weary hikers who trek the Appalachian Trail each year.

It’s estimated that 3 million people hike the 2,190-mile Appalachian Trail every year, with an estimated 3,000 attempted thru-hikes of the entire trail in 2016.

As a result, hundreds of AT hikers rely on Monson to stock up on supplies, shower, eat a home-cooked meal, run a load of laundry or pick up their mail. And numerous local businesses cater to these hikers, offering them a place to eat, refresh and spend the night.

Located in the southwest portion of Maine’s Piscataquis County, Monson is a small but beautiful town surrounded by mountains and forest.

Originally established in 1822, Monson was a quiet, sleepy town that saw its population double with the discovery of high-quality slate deposits in the late 19th century. When the slate mining operations became less profitable, the remote town appeared headed for extinction. But the town’s strategic location on the Appalachian Trail saved it from disappearing as hikers, initially few in number but eventually growing to hundreds each year, brought with them much needed revenue. 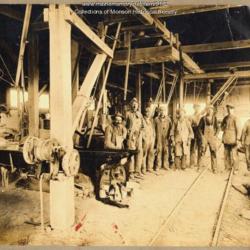