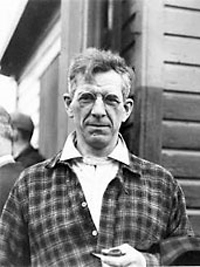 In 1921 Benton MacKaye wrote an article in the Journal of the American Institute of Architects that described his vision of a trail that ran down the spine of the Appalachian mountain range.  MacKaye envisioned a special place in American that was easily accessible to millions and offered an outlet to escape the drudgery of everyday life.  People could use their leisure time to explore the wilderness and recuperate from their stressful lives.  MacKaye even suggested that the clean mountain air and living could be of medicinal use.

“The oxygen in the mountain air along the Appalachian skyline is a natural resource (and a national resource) that radiates to the heavens its enormous health-giving powers with only a fraction of a percent utilized for human rehabilitation.  Here is a resource that could save thousands of lives.  The sufferers of tuberculosis, anemia and insanity go through the whole strata of human society.  Most of them are helpless, even those economically well off.  They occur in the cities and right in the skyline belt.” MacKaye believed that illnesses could be cured if people took to the mountains for exercise and clean air.

In reality even the Appalachian Trail (AT) offers its own health risks.  Every year people sprain ankles, break bones, encounter wild animals, and get sick.  The AT is a great way to exercise and escape the pressure of everyday life.  Yet, it's wilderness in which diseases do exist.  Three common communicable diseases found in the AT are lyme disease, norovirus, and giardia.

MacKaye’s vision of the AT did not take into account these diseases and how hikers can become ill while traversing the trail.  Even with this knowledge; however, thousands of hikers take to the trail each year.  Some get sick, others do not.